Back in 2004, the Syfy (back then “The SciFi Channel“) released a miniseries “adaptation” of Ursula K. Le Guin‘s Earthsea trilogy, titled Legend of Earthsea.

The main cast was entirely white, except for the character Ogion, who was played by Danny Glover (and apparently some spear-wielding primitives).  The problem with that isn’t just that there is a gross lack of diversity in the series (which is a completely legit problem on its own, and one that plagues science fiction entertainment today). 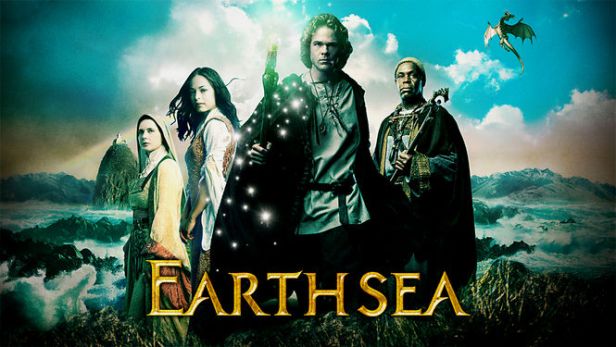 The problem was that the series was based on books in which the majority of the characters were brown or black… (except for a people made up of brutish, war-hungry white men). The main character was described as “red-brown” and his best friend as just straight up “black”.

Somewhere this got conveniently “lost” in translation. Numerous readers (of every hue– I mean, the books freaking sold over a million copies!) were seriously miffed about many of the liberties taken in the series, and the lovely Ms. Le Guin stood up on the soap box herself and took SyFy to town in an article on Slate.

And boy did she lay down the law!

The first book of the Earthsea trilogy A Wizard of Earthsea was published on September 13th, 1968– 46 years ago today. So to commemorate this dope series, and her-geeky-outsiderness Ursula K. LeGuin, here are some of the gems from the magnificent shade she threw at the SciFi Channel some 10 years ago:

“I had been cut out of the process. And just as quickly, race, which had been a crucial element, had been cut out of my stories. In the miniseries, Danny Glover is the only man of color among the main characters (although there are a few others among the spear-carriers). A far cry from the Earthsea I envisioned.”

“My color scheme was conscious and deliberate from the start. I didn’t see why everybody in science fiction had to be a honky named Bob or Joe or Bill. I didn’t see why everybody in heroic fantasy had to be white (and why all the leading women had “violet eyes”). It didn’t even make sense. Whites are a minority on Earth now—why wouldn’t they still be either a minority, or just swallowed up in the larger colored gene pool, in the future?”

“I was a little wily about my color scheme. I figured some white kids (the books were published for “young adults”) might not identify straight off with a brown kid, so I kind of eased the information about skin color in by degrees—hoping that the reader would get “into Ged’s skin” and only then discover it wasn’t a white one.”

“Gradually I got a little more clout, a little more say-so about covers. And very, very, very gradually publishers may be beginning to lose their blind fear of putting a nonwhite face on the cover of a book. “Hurts sales, hurts sales” is the mantra. Yeah, so? On my books, Ged with a white face is a lie, a betrayal—a betrayal of the book, and of the potential reader.”

“I think it is possible that some readers never even notice what color the people in the story are. Don’t notice, don’t care. Whites of course have the privilege of not caring, of being “colorblind.” Nobody else does.”

The best part of the article, though, and one of her best points, is that many readers of color wrote to her and let her know how important it was to them to feel included and see themselves represented as heroes in a genre that neglects them to an astonishing degree.

Race-bending characters in adaptations is really cool and can be really interesting. But in a genre (ahem… and an entire entertainment world) where characters of color are completely absent or never get to play hero, it’s something entirely different to take the color out of the picture…