Because let’s face it, your mom is a superhero. Here’s some of the company she keeps!

Raquel Ervin had only been a superhero for a short time when she found out that she was pregnant. Still a teenager, she stepped up and decide to have the child and be an awesome mother. She put her heroics on hold for a time in order to raise her son well, but soon returned and kept a beautiful superhero-mom balance. Hardcore. Besides, she named her son Amistad Augustus Ervin.  Awesome.

The first pages of Saga feature the birth of Alana’s first child, moments before all hell breaks loose and the intergalactic soldiers, from the war Alana and her fiance Marko deserted, appear and start blasting holes in each other. Alana and Marko are on the run as the most controversial and hunted interracial couple in the galaxy, and both are fiercely determined to survive and bring their daughter into a more peaceful world. Alana takes nothin’ from nobody when it comes to her daughter, not even Marko.

Speaking of interracial couples and badass moms… Athena Agathon is no joke. A cylon, she mixed it up with studly human soldier Captain Karl C. “Helo” Agathon.  Their baby became the first cylon-human child in the galaxy and the couple stuck it out through horribly racist anti-cylon hate and death threats in order to protect their baby girl. When their daughter was kidnapped, Sharon did everything possible to get her back, even if it meant putting the whole fleet at risk.

Lauren Olamina (Parable of the Sower) 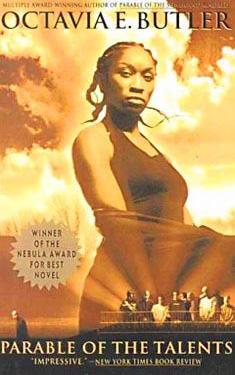 Lauren Olamina basically predicted the apocalypse. She was ready for it, and not only survived it herself, but gathered a group of loyal forward-thinking survivors and started and protected a colony in the midst of madness and violence.  She established some sense of normalcy in her chaotic world and created a place where she and others could start families. Lauren however wasn’t so lucky, as her own daughter Larkin was taken and hidden from her for her daughter’s safety, when Lauren became the focus of a lot of unwanted attention from the country’s new bigoted and religious fanatic president. Larkin grows up bitter about not being a part of her mother’s famous cause-driven life, but ultimately Lauren is working to create the kind of world she wants her daughter to grow up in.

Martha Washington is a soldier in the PAX Peace Force during the second American Civil War. Martha fights for decades from 1995-2095, fighting with revolutionaries to stop corrupt government from destroying the world and oppressing the people. She dedicates her whole life to the cause and eventually marries and has children, but never gives up the fight. Her life-long fight inspired future generations who carried on the fight, including her possible granddaughter.

Lilith might be the coolest of them all. A survivor of the nuclear destruction of Earth, Lilith is “abducted” by an alien race called the Oankali, who intend to use her and other human survivors to create a human-Oankali hybrid race to repopulate Earth. At first Lilith is skeptical and afraid of her captors, but eventually she gains their trust and they hers and she goes on to awaken more human survivors and even have children with the Oankali. Children who are the first leaders of the repopulation of the Earth. So basically, the world blew up and Lilith and her kids fixed it. Awesome.

10 thoughts on “Awesome Moms of Color in Sci-Fi & Comics”