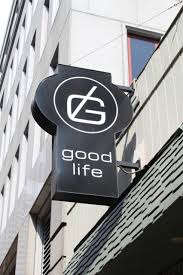 When you first walk in, The Good Life looks like every other downtown bar in Boston on a Tuesday night — suit-and-tie types sipping gin and tonics at polished fine-wood high tables. But follow the LCD glow emanating from the bar’s basement, and things are gonna get geeky.

It’s Game Over – the weekly game night at The Good Life.

In a dark booth across from the bar, a Nintendo 64 flashes GoldenEye 007 game play. Across from that an enraged gamer cries a desperate “gah!!” as Mario flies past Koopa Troopa on his tricked out go-kart. From the far corner a beepy rendition of the Aladdin soundtrack has pulled in a decently-sized audience around the resident Sega Genesis to watch Abu and Aladdin jump their way through town (seriously, I forget how magnetic that game is! Just try to tear your eyes away from the gameplay).  Street Fighter II, Sonic the Hedgehog, Super Mario Kart, GoldenEye 007, NBA Jam…

Yup. The Good Life has restored the 90’s to its rightful glory – the dark basement of an otherwise bougie downtown bar.

Add to that booze and some seriously addictive fries and sliders… ya, I’d say that’s pretty good livin’.

I can’t speak to the bar on any other night, or even the upstairs part of the bar on Tuesdays for that matter, but their game night is pretty epic.

Armed with a Munchkin Zombies deck and a recent paycheck so I can shell out $10 bucks a pop for their cheapest Bourbon, I’ve only ever had a great geeky time. Drinking and gaming? How can you go wrong?

Even in an era where somehow geek got cool and everyone hearts nerds, it’s great to have a place where you can geek out as hard as you want, shout awkward obscenities at NBA Jam, or furiously debate the finer details of a Class card without getting that “okay, this got too real” side-eye we’re all familiar with. It feels almost clandestine.

When you finally manage to pull yourself away from the console, clear up your tab, and readjust to the natural light, you feel like a super nerd agent emerging from your secret underground nerdquarters, back into the normal bar scene that’s been unfolding upstairs all this time. You might even give a secret nod to the bouncer on your way out and look away before he throws a wtf? face your way.

Unlike many of the Tuesday regulars, I don’t work in an industry where I run into a lot of gamers or comic book readers, so a refuge like game night is a necessary relief where I can shamelessly unleash the geek.

Because even though geek is cool these days, we all still get that “whoa. too much” look when we get way too into it and reveal just how deep the geeky runs. And if you’re like me, you get that surprise face even in a crowd of the geekiest geeks. The other Black girl who shows up some Tuesdays knows exactly what I mean. They never suspect us. Eventually I’ll hunt down some browner geek havens, But in the meantime…

I’ve slowly accumulated a ring of nerd havens since I moved to Boston a few years ago, and I figure maybe there are some Beantown noobs out there who could use a starter map:

Pandemonium Books and Games in Central Square has a basement full of games, expansions, and gamers gaming. Literally every night of the week they host a variety of tabletop gaming events, including Magic, D&D, Yu-Gi-Oh, and an open board game night.

The Million Year Picnic in Harvard Square hosts signings with comics artists every now and then, but what’s more enjoyable is that the staff here is crazy knowledgeable and friendly and will talk to you for hours about the minutiae of 80’s comics history until you get your geekery fill.

The Garment District in Kendall Square has all your cosplay needs! (okay, so you’ll probably have to hunt around and get to sewing for the details, but this is a great places to start)

And in case you were living under a rock… Boston Comic Con is coming up next weekend – April 20!