Yup, you read that right! It turns out back in 1975, Marvel had the genius idea to give a down-and-out librarian named Valerie a chance at the webs. The character had appeared first in a live-action skit on PBS, and was later incorporated into an issue of Spidey Super Stories (#11). The first Spider-Woman appeared in 1944 and only in one issue, and not until 30 years later did Valerie make her way onto the scene.

Valerie had no superpowers (other than of course her super awesome bookishness), but after a little self-training, she was able to hold her own with Spider-man himself, which doesn’t say much for Spidey’s skill… Her heroics were short-lived though, not lasting past the single issue. After her homemade suction cups fall off her days of climbing walls and saving Spider-man were over.

If she’d stuck around would we still have a Black Spider-Woman today? Would she have been as popular as the other renditions? Maybe when Miles Morales grows up, his daughter will follow in his radioactive footsteps!

Also anyone else kind of baffled that it took them so long to even try for Spider-Woman? I guess webs and a tingly spidey sense were just too masculine… 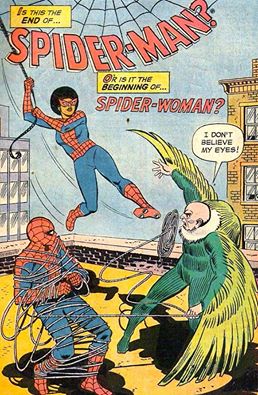 via Black Comix and Comix 365