Back in 2011 it was announced that Showtime was planning to adapt John Layman and Rob Guillory’s Chew as a TV series, but just this February Layman tweeted the sad news that it wasn’t happening after all.

But now, they’ve got Hollywood on the case, with Quality Transmedia’s Jeff Krelitz planning to bring both animated and live-action adaptations of the hard-boiled cibopath detective Tony Chu to the small screen. And it’s about damn time! According to Hollywood Reporter, Krelitz is currently in talks with studios about the live-action version.

Frankly, as amazing as it would be to see Ken Leung mean mugging as Tony Chu, Chew gets seriously gross on like… every page. It might be a lot to stomach to watch a real live, non-caricatured human valiantly chow down on corpses.  But, then again….awesome.  I mean…The Walking Dead (actually, what is it with Image Comics and eating people?). 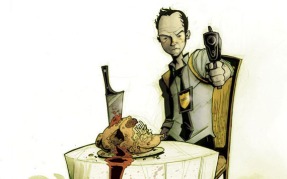 This venture seems long overdue if you ask me…