So, you’ve probably heard by now all the fuss about writers J.H. Williams and W. Haden Blackman leaving DC Comics after the editors told them they couldn’t write Batwoman‘s marriage. Big hulabaloo ensues. DC replaces them with an openly gay writer to make themselves look better, and they defend themselves by saying the no marriage thing had “nothing to do with the sexual orientation of the character,” but rather because, as Dan Didio said at Baltimore Comic Con…

“Heroes shouldn’t have happy personal lives. They are committed to being that person and committed to defending others at the sacrifice of their own personal interests.”

I mean, fine. It’s true. Heroes of the super variety do tend to basically have shitty lives. Batman can’t hold on to a lady friend, Iceman basically almost destroys the world, Rogue can’t get anywhere near first base…

But let’s think about this for a second.  Marriage is kind of a sensitive topic in the LGBTQ community.  You know, the institution being not-so-fictionally denied them until about oh two and a half months ago.

So an editorial board denying one of its few LGBTQ heroes the chance to get married without some kind of story referencing DOMA or something and then saying it has “nothing to do with the sexual orientation of the character” is sort of like putting a giant banana on a comic full of Black characters and saying it has nothing to do with race… Oh wait… that happened too.

Point is, sure maybe they didn’t decide Batwoman couldn’t get married because they are against gay marriage, but rather because they don’t want any of the Bat family getting married (which isn’t actually what they said, they only said they don’t want them having happy personal lives, but whatever). Nonetheless, it’s pretty ignorant to pretend the denial of marriage in general has nothing to do with the LGBTQ community.   Add on top of that the fact that they created an alternate universe Alan Scott, the classic Green Lantern, who was gay and proposed to his boyfriend only to see the boyfriend die like 2 seconds later. Smell an unfortunate trend? But let’s stick with their story and accept that it wasn’t anti-gay marriage, just kinda dumb and insensitive.

Bananas are bananas. Put them on a picture of a bunch of Black folk, they’re not just bananas anymore… regardless of the intent. Is DC’s decision anti-gay? Probably not. Is it ridiculously stupid? Yup.

To exemplify just how stupid, here are 5 other ways that DC could make sure Batwoman’s personal life stays full of suck (mildly spoilery if you don’t keep up with your DC). 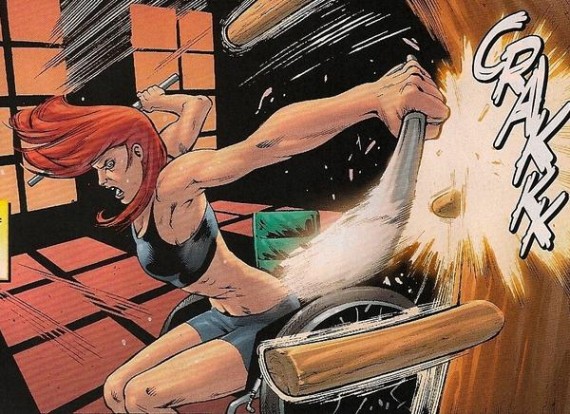 What could possibly be worse for a hero who’s “committed to defending others at the sacrifice of their own personal interests,” by punching and kicking things than taking away their ability to punch and kick things. Oracle (Batgirl) knows a thing or two about it, lucky for her she’s also a super computer whiz and managed to stay in the game that way. But what about our military-trained, party-girl Kate Kane? Here’s betting she go on a twenty-year drinking binge and destroy her marriage before Batman bought her bionic legs or something. Then she could be all sad and wompy all the time about how she alienated her wife and was half-android now.

You know what’s more traumatic than not getting married? Getting married and then watching your significant other die. Just ask Katana. The whole kill the love of your life thing is totally a staple of hero adventures. It’s basically how women got into the business at all. Got a hero? Here, have a woman he can love and lose so he can go all dark and gruffy, just how we like ’em.  And it makes life totally worse if you give the hope of happiness first and then rip it cruelly away and scar them for a good long forever. Just look at Katana, she’s been talking to her husband’s spirit in a sword for some 30 years now.

Seriously, the potential for a miserable personal life only increases with marriage (no jab intended at you lucky couples), but honestly, imagine if Kane was allowed to marry her beloved, and then they have a successful in vitro, despite all odds, and raise a happy plump little boy name BatAwesome, who lives a solid 10 years only to be used to try to murder you and ultimately get killed by his own clone.  Ya. That’d really suck, wouldn’t it Talia, Batman?

4. Blow up her whole planet.

Actually, maybe not. Superman seems to be doing alright with all that baggage…

5.  Kill every single woman on Earth in one fell swoop, except her.

LOL. Ya that’d suck, right?  Brian K. Vaughan was clearly playing off of that male fantasy to be the only male option on Earth when he killed off all but one guy in Y: The Last Man. But imagine it the other way around. A woman who loves women stuck in a world full of dudes… I can’t even deal with the level of sad and effed up that is. But now imagine if she had been married to Mags when that horrible ish went down. Rather than a man alone in a world full of women (with mostly violent intents towards him) searching desperately for his girlfriend, you’d have one really really lonely, miserable, sexually-frustrated Batwoman.

Okay, that’s a stretch, but you get the point, right? Marriage is maybe sort of totally a big deal for everyone, but it’s especially poignant for those denied the right, and the wound is still fresh, so maybe a little extra thought on this one DC? Maybe no hard fast rules that you blanket across your mostly white, male heroes. If you’re gonna have a diversity of heroes, you might want to have a diversity of miseries too, ya?

2 thoughts on “5 Ways To Make Your Superhero Miserable”