Featuring one of the most diverse superteams ever, Al Ewing and Greg Land’s Mighty Avengers has been one of the most anticipated comics of the Fall, and this first issue matches the hype with a just the right dose of action and a rich introduction to our new team’s leaders and the motivations of the new team-up.

Brian Michael Bendis really developed the character and storyline for Luke Cage in his New Avengers run, daring to do something few creators have worked into superhero plotlines — giving him a wife and a child, which not unexpectedly resulted in his retiring from the Avengers. But that didn’t sideline him completely. Cage has still very much been a part of Marvel storylines, presenting a conflicts of interest and new motivations for the character regarding his new role as a family man.

This issue really draws those strings together and gives us a relatable and real reason for Cage’s desire to lead a team again. Aside from the fact that the regular line-up of Avengers is busy fighting alien militia in space, Cage really wants to get back in the game to make his family proud. The brief glimpse we get of Cage’s relationship with the young hothead Powerman promises an interesting dynamic between the two, something of father-son like mentorship that is clearly impacted by Cage’s new role as a father.

In this issue we also get a solid look at the return of Monica Rambeau, who’s underuse in the Marvel universe over that past 10 years has been criminal. An incredibly powerful hero and a smart leader with an interesting backstory, Monica was the first Black female superhero to have her own self-titled comic in Captain Marvel in the late 80’s.

After leading the Avengers in the 80’s when she was Captain Marvel, she quit when she briefly lost her powers and returned to her hometown of New Orleans, Louisiana.  Despite an appearance as the leader of the C-list superhero team in Nextwave, Monica never really quite made it back to prominence. It seems an odd fate for such a smart and incredibly powerful hero. Ewing and Land’s Mighty Avengers aims to bring her back with a vengeance… and a perm.

(Not gonna lie, it seems a little out of character to see Monica, who’s always sported natural hair, with her new straightened shaggy bob cut.  But it’s great to see her back, no matter the hairstyle.)

In this first issue, Ewing and Land certainly captured just how powerful Monica is, as well as her very serious dedication to her duty as a hero. Despite her new costume and her brand new moniker (that one can only hope she’ll manage to hang on to this time) as Spectrum, she’s still the same amazing Monica.

This issue hints at many of the tensions and dynamics we’ll have to look forward to throughout the series, including that between Luke Cage and Superior Spider-man, who seems anything but on board when the makings of a team start to come together as Thanos’ thugs attack New York.  Otto Octavius’s snarky egotism is bound to clash with Cage’s no-nonsense leadership. And the youngins on the team, White Tiger and Powerman, already seem to have a clash of ideas about what it means to be a superhero. 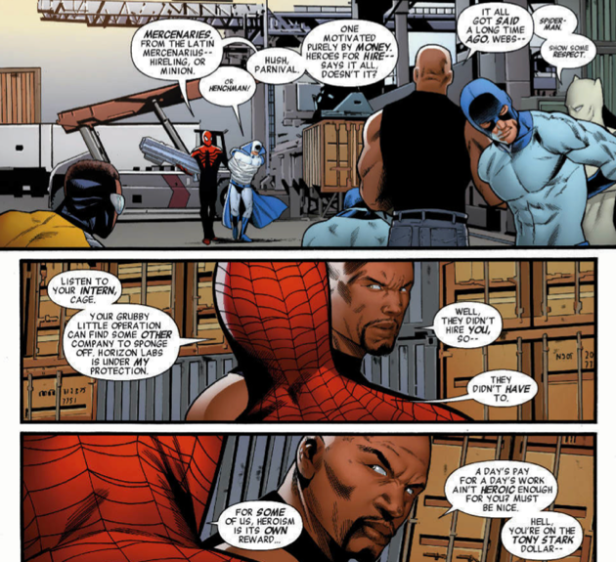 Add to all that our mystery Ronin who Monica seems to have a bit of a past with, and this first issue has knotted this team together intricately and it’s looking to be a ton of fun to unravel.

With Ewing’s historical love for two of the most dynamic Marvel heroes Luke Cage and Monica, it looks like we’re in for a lot more than trash talk and jaw breaking. Mighty Avengers #1 demonstrates that Ewing and Land intend to continue the focus on rich character development that Bendis brought to New Avengers. And here’s hoping we see the creative team bring up the tough issues with this awesomely diverse cast of heroes.

Verdict: Get it! Even if you’re a trade buyer, you’re gonna want to own #1 when this series gets all epic. A must-read. 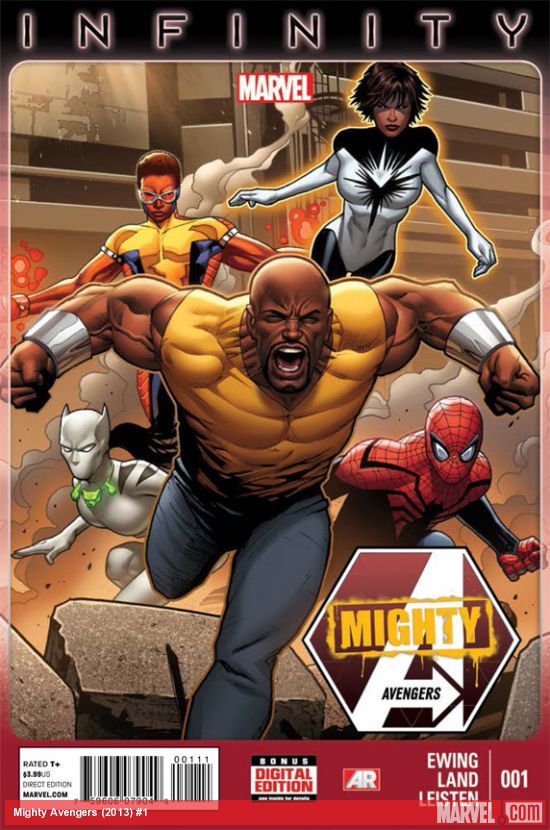