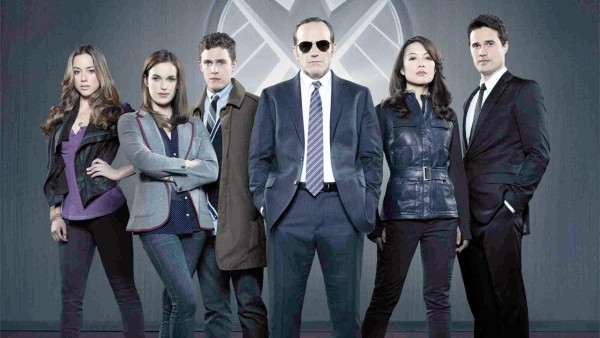 So this is what it looks like when Joss Whedon gets a budget — hover cars and sniffing microbots.  Tuesday night’s Agents of S.H.I.E.L.D premiere was loads of high-tech fun. We got booms and bangs, plenty of shiny science hooblah, and loads of Marvel Easter eggs to satisfy our nerdy fan appetites.

Not to mention, for the Whedonites in the room, there was a lush offering of dramatic one-liner exits, mostly delivered in the awkward geeky snark of Agent Coulson, and that punchy overly-self-aware dialogue we all adore from any Joss flick.

And because it’s Joss, we also got women kicking ass, nerdy women scientists, one kind of annoying magic female computer whiz, and at least one scene of male debasement in the truth-serum afflicted Agent Grant Ward. Loved it.

But what about our brownfolk/POCs? [spoilers]

Well, it does pass our Token Test –we’ve got Melinda May holdin’ it down for POCs on the S.H.I.E.L.D team and we got Michael Peterson, the factory worker who had “some tough breaks,” as our cast of saviors proclaims while looking downcast before rushing to the rescue… which naturally includes a shot to the dome piece for our tragic newbie “super”hero.

But not until our dear Mr. Peterson gives a heartfelt speech about underdogs like him getting “stepped on,” and then *boom* shot to head. Seriously. At that point, he was all calm and Coulson was giving his best “I feel you, bro,” couldn’t they have just been like “hey, now that we’re all full of feels, mind if I inject you with this thing that’ll keep you from blowing up? ‘Cause that’d totally make you a hero…” Or hey, maybe he isn’t impervious to bullets, ya know? That wasn’t actually established so, uh maybe try shooting him in the arm or something, ya? Jeez.

But nah, shot to the head is way better. Ya, I get it, dramatic effect. Shock! How Dare! Oh wait… phew, it’s cool. The slow music over the scan of shocked then suddenly relieved faces makes for better TV. Then again, I’d really love to tune into a show (or, oof, the news) someday where the black dude doesn’t get shot. Ah, someday.

As for other POCs, I was particularly charmed by Skye’s game-time use of stereotyping, when she kicks a dude from a stereotypically-dressed “gang” of Latinos (who just happen to be waltzing by)  in the balls just knowing that they’ll proceed to turn on the POC violent rage and fight the desperate Black dude strong-arming her into helping him. Maybe it’s just me, but I feel like she would’ve had better chances yelling “help!” in the midst of a train station full of white folk, who probably would’ve stepped in the minute they saw dainty, shiny-haired white girl being man-handled by sweaty grungy Black dude anyway, than crossing her fingers that a group of “hot-blooded” minorities would walk by at the right time for a little chauvinism manipulation.

Yea… that 3 minutes of airborne Latino “thugs”docks ya at least 2 points out of five, 2 off for the head-shot ’cause I’m bitter, but back up one for the Shepherd cameo, because yes. So 2 out of 5 for the POC rep.  Do better.

But we’re holding out hope still. And we’ll be back for Episode 2, mostly out of fanlove for the Whedon team, and with hopes that Skye will try to snark Agent May and get her ass handed to her.

Other things we’re looking forward to:

What Made Melinda May Get Out of the Field?

Agent May‘s got that gruff thing going for her way better than Agent Ward. There’s just gotta be some juice on how she got so damn good at hitting things and why she would rather staple red tape together than body slam grown men.

By now we know something wonky went down with Agent Coulson in this metaphorical “Tahiti,” and methinks it’s got something to do with the crazy Matrix moves he put on display when angry super guy threw a van door at him…

4 thoughts on “An Outsider Review of Marvel’s ‘Agents of S.H.I.E.L.D.’ premiere”