When Bryan Singer announced back in December that Anna Paquin’s scenes as Rogue in the forthcoming X-Men: Days of Future Past were cut, I was devastated. It’s hard when your favorite character is taken out of a movie (even if it was probably only one scene).  When the new issue of Empire Magazine came out last month featuring Rogue on one of the limited edition covers, Singer had to clarify that “it does not mean that we won’t see her in the film.”  A part of me gets it. This story is more focused on the First Class actors and not necessarily the original franchise actors. But then, I wonder, why even announce to the public they’re appearing in the film and include them in the promotional materials (including the first trailer), if they’re to be cut out during the editing process?

Over the weekend, rumors about Halle Berry’s Storm being reduced to just one scene flooded the internet. It was reported by the NY Daily News, so take that with a grain of salt. I’m not necessarily convinced, but if it does turn out to be true that will mean that X-Men: Days of Future Past will have cut two of the only five women characters out of a film with sixteen male characters in it.

We already know that Kitty Pryde (the focal point of the Days of Future Past storyline in the comics) is being replaced by Wolverine. And while the writers have already explained that it wouldn’t make sense for Kitty to time travel to the 1970’s because she wouldn’t have been born yet, it still reeks of yet another X-Men movie where Wolverine has to take the reins from the other characters. Blink, while a nice addition to the series, probably won’t have much screen time or lines for that matter, leaving only Jennifer Lawrence’s Mystique as the only female lead in a movie truly filled with X-Men.

This entire situation has led me to reexamine the representation of the X-Women in the X-Men movies, and it turns out, it isn’t pretty. Let’s break it down film by film.

The first baby in the franchise that started it all. Anna Paquin’s Rogue definitely has the most screen time and is a crucial part of the story. And while fans have complained that her Rogue is really just a hodgepodge of Jubilee and Kitty Pryde, I do believe that Paquin brought a great sense of vulnerability to the role. Famke Janssen’s Jean Grey probably has the next amount of screen time, followed by Halle Berry’s Storm. Rebecca Romijn has one line in the film, yet gets a variety of eye-candy fight scenes (why is she naked exactly?).

Err. I guess Hollywood changes everyone

We also see a very small cameo by Kitty Pryde. This film shows a lot of promise and room for growth in the ladies and their characterizations.

We see shades of that growth in Mystique and Jean Grey in this next movie. Mystique tells Nightcrawler that mutants shouldn’t have to hide when he asks her why she just wouldn’t always stay in disguise. The writers still don’t know what to do with Storm and she spends the majority of the film piloting the Blackbird with her large white eyes commanding the weather as opposed to actually getting out in the sky and flying. Rogue’s still the damsel in distress and only gets to use her powers twice throughout the whole film (one time is only kissing Ice Man for god’s sake). Jean sacrifices herself to save the team at Alkali Lake giving us the promise of the Phoenix in the third film. This time we have more cameos from Kitty Pryde, Jubilee, and Siryn. Lady Deathstrike fills the role Mystique had in the first movie, with an epic fight scene with Wolverine, and again, only one line.

This movie had maybe the most female characters, yet didn’t seem to know what the hell to do with them.  Kitty Pryde was finally given the chance to become a part of the team with the excellent casting of Ellen Page, yet her storyline revolved around a love triangle between her, Ice Man, and Rogue. Paquin’s Rogue was relegated to the background and given the ridiculous storyline of taking the mutant cure because boo woo she can’t kiss her boyfriend? She displays her powers only once (Colossus saves her in the Danger Room from getting crushed by some falling debris)—making Rogue the perennial victim of the X-Men franchise, despite Paquin’s best efforts to give the character some depth, the writers clearly didn’t know what to do with her. Storm becomes the reluctant leader of the X-Men after the deaths of Xavier and Cyclops and finally gets to fly, yet somehow, it still feels like Wolverine’s in charge. (The wigs for Berry just keep getting worse.)

Jean Grey’s Dark Phoenix storyline had so much potential and then was wasted away with a pointless death of not only her, but of Xavier and Cyclops as well.  While in the comics, Jean Grey is the central player in the Dark Phoenix storyline, in the third film, she just stands in the background and scowls a lot. We have throwaway cameos from the likes of Psylocke, Arclight, and poorly-designed bit representation of Calisto.

Do I really have to comment on this? We have Silver Fox (the love interest) and a throwaway Emma Frost (her sister?). The continuity of the movies and its characters begins to unravel dramatically. This film represents the worst in female representation in the X-films in my mind.

We have more eye candy in the forms of January Jones’s Emma Frost and Zoe Kravitz’s Angel. Rose Byrne’s Moira MacTaggert gives a wonderfully-constructed performance, but only has a chance to shine briefly in the beginning. Jennifer Lawrence adds the necessary depth so lacking in Rebecca Romijn’s previous incarnations. 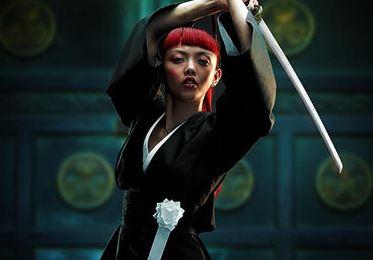 Rila Fukushima’s Yukio kicks butt. Tao Okamoto’s Mariko isn’t a simple damsel in distress. Svetlana Khodchenkova’s Viper (while she gets a ridiculous ending), does have a decent amount of screen time. Famke Janssen serves as Wolverine’s eye candy in a dream fantasy. Of all the X-films, The Wolverine ironically has the best representation of female characters, while giving them strong characterizations and enough screen time to match Hugh Jackman.

We have young Mystique. Blink. Kitty Pryde. Perhaps Storm. And maybe the tiniest chances of Rogue making an appearance.  That’s it kids!

Singer says this film will be set in the 1980’s and we might see some familiar faces as their younger selves. Could we dare hope for Lupita Nyong’o as a young Storm with a mohawk?  Or how about a perky Emma Stone as a young Jean Grey? Or maybe add in some new characters like Polaris, Dazzler, Psylocke?  Or will they add ten more new male character instead?

Hopefully we’ll see either Domino or Psylocke in this one. Or preferably both.

There’s a part of me that thinks the easiest thing to do would be to start from scratch and reboot the franchise, yet I still hold out hope that future X-films will give the women a chance to shine. I understand that not every character is going to get the same amount of screen time, yet it’s ridiculous that the X-Men films (with source material featuring some of the most fully developed and powerful female characters in probably comics’ history) has relegated them to either damsels in distress, eye candy, or background noise. There have been some signs of progress (James Marigold’s The Wolverine), but these recent developments with Bryan Singer’s movies still prove to me that we live in a Hollywood where comic book movies are still for “the boys” and are written and directed by men. Lauren Shuler Donner, get it together, girl! I think you need to hire the talents of Marjorie M. Liu, Gail Simone, and Louise Simonson to take a shot at the next script. There’s excellent source material available. All it needs is a woman’s touch.

But the men can do it too. Screenwriters, take a gander at Brian Wood’s first storyline in X-Men, or maybe even some of the classic Chris Claremont stories for inspiration. I think you need it.

3 thoughts on “Bros Before Rogues: Is the X-Men Franchise Getting Worse at Representing X-Women?”